With summer here, we headed to the coast with Katie for a planned hike along the Oregon Coast Trail (OCT).  The key word in that sentence is "planned".  Things don't always work out as planned, even when hiking.

Our original plan was to hike from the Whaleshead Beach Day Use Area south to the Lone Ranch Beach Day Use Area and back - a nice 10.4 mile hike along the coast.  After parking at the upper trailhead at Whaleshead Beach, we hiked the OCT connector trail down to the day use area.  Since no one has been maintaining the OCT, at least half of this short hike was in grasses and bushes up to our chest - couldn't even see Katie half the time.  We did emerge from the jungle at the day use area but that should have been a warning sign to us of things to come.

The next 1.2 miles of the OCT is a hike along the Whaleshead Beach which today was very windy even at 10:00 am.  It was still very beautiful and we enjoyed the sound and sight of the ocean.  After about 1.2 miles the beach comes to an end due to rocks and the OCT heads uphill to the ridges above the beach.  However, that portion of the trail had been wiped out by rains or a landslide.  There was an improvised faint trail heading up (and we do mean up) so we attempted this faint trail but it became a very dangerous situation for man, woman and dog. Rather than risk body and limb, we slowly decended back to the safety of the beach.


Ok, so part 1 of our hiking plan failed.  We hiked back along the windy beach (now hiking into the wind)  and back to our car (not along the connector trail) via a gravel road.  We then drove south to the House Rock Viewpoint and decided to hike the OCT south from there to Lone Ranch Beach.   This worked for about a mile when the unmaintained and faint trail pretty much disappeared.  We could have scouted around and maybe picked up the trail, but we didn't want to become the 6 o'clock news "missing hiker" story, so we once again turned around and found our way back to the viewpoint and car.  So part 2 of our hiking plan failed.


So it was time for the final "safe" option of driving to Harris Beach State Park where we hiked the Sunset Point trail, through the campground, and along the connector trail to the day use area.  The ocean and beach were beautiful and we took time to sit on a few benches along the trail and just enjoy the sights and sounds of Oregon's beautiful coast.

Even though our day did not go as planned, we still enjoyed seeing the coast and got in 8 miles of hiking anyway which put us over the 300 mile mark for the year - the hard way.

Glenn took another Wednesday off and this time we hiked without Katie since these longer hikes seem to do her in.  We drove up towards Mt Ashland and hiked an out and back on the Pacific Crest Trail, a segment known as Ashland Meadows (due to the varioius meadows with wildlflowers along this trail) or Grouse Gap (since most folks turn around at the Grouse Gap Shelter for a nice 6.8 miles hike). We were actually a little early for the full blooming of wildflowers although there were plenty to see including Larkspur, Pussy Paws, Wallflower, Skunk-leaved Jacob's Ladder, Blue Stickseed, Mission Bells, a Dwarf Lupine and many more. About 2-3 weeks from now should see the wildflowers at their best. As we began our hike there was some leftover ice/snow from the recent storm, but that soon gave way to plenty of sunshine, blue skies and temps around 62 degrees --- beautiful!  We had views of snow-covered Mt Shasta to the south and there was plenty of run-off water crossing the trail.  We did meet one PCT hiker who started in Castle Crags SP in Northern CA and was planning to go all the way to Canada.  He ran into 5" of snow in Seiad Valley a few days ago.    We had a beautiful 11.4 mile hike as we went a few miles past Grouse Gap (after a break at the shelter) before deciding it was time to turn around.   We wanted to just keep going!  Hope you enjoy the pictures.

Posted by Glenn and Carol at 2:48 PM No comments:

Glenn took a day off work and we headed over towards Klamath Falls to hike at Spence Mountain Park. Last year we did a 10+ mile hike on various trails starting from the Shoalwater Bay TH, so today we started at the other main TH, Spence Mountain. 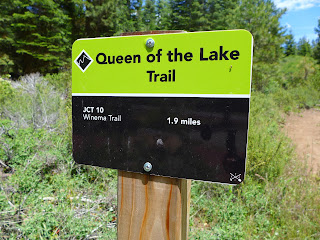 There are 3 trails that were just completed last year, so our plan was an out and back along these 3.  The first trail, and our favorite, was the Queen of the Lake,  The trail follows the shoreline of Klamath Lake and provides some great views.  We were also treated to 3 sightings of Bald Eagles and later saw their nest and  young along this same trail.

This trail is rated "extremely difficult" and was very rocky with many rock only sections of trail.  We think the trail rating is for biking which is the main use of these trails.  Today we only saw one biker the entire 5 hours of hiking.


The North Star trail was mostly flat with little climbs and descending sections but wound us through forested areas.  We periodically saw wildflowers along this trail and the others as well, but it seems most were past their bloom.  We did not hike all of the North Star trail, but stopped after a couple of miles in to eat and take a break.

After our break we retraced our hike except for the Lower Winema Trail.   We saw a TH sign that pointed in a different direction than the "road" we had hiked up, so we followed the real Lower Winema Trail back to the Queen of the Lake trail.


In all we covered 10.5 miles in 5 hours and began to feel the temp as the Klamath Falls area heated up.  Katie was so tired that near the end of our hike she would just stop and lay down in the trail.  All 3 of us did make it to the car and home after a long but enjoyable hike at Spence Mountain Park.